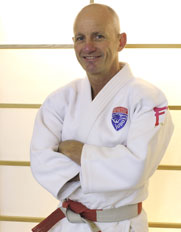 Peter Gardiner is the Founder and Director of Coaching at Sportif Judo. He has previously held positions as the National Coach for Denmark and India, Director of Coaching for Judo Scotland and Director of Development for British Judo. He has been a professional judo coach and coach educator all his life and lectures on coach and player development for the International Judo Federation, the European Judo Union and Bath University.

1)What has led you into youth sport?
I have been a full-time judo coach since leaving school at 16. My club at the time (The Edinburgh Club) was the only professional judo club and gym in Scotland and I was employed as a full-time judo coach and coached around 400 players a week with an age range for 5 years to adults. Total baptism by fire, no induction, just dropped in at the deep end.
2) What has been your biggest influence in your practice in youth sport?
I can honestly say I have no real influences in my coaching and I think that’s because I was so young when I started. Actually that works in many ways, because it means you have no preconceptions and it makes you very open minded to other influences and encourages you to think out of the box.
I am always looking at ways to improve and develop my coaching system and skills. I steal ideas from other coaches, other sports and always, always keep an open mind. What I think was right this year may well change next year.
Our clubs strap line is ‘Judo builds people” that is one of the many quotes from the founder of Judo, Dr Jigoro Kano. His idea and philosophy was to use Judo as vehicle to develop people in a positive way. That has always been my plan and the system we have at Sportif Judo is based around that simple that idea that ‘Judo builds people”.
3) What is your particular area of interest?
Seeing young people develop into positive, successful adults.
4) What is the best piece of advice you’ve received?
No one person is bigger than the club.
5) What advice would you give to coaches working with youth athletes?
Coaches are givers, players are takers that’s how it is, so coach because you want to coach and don’t expect any thanks. Players come and go, don’t get attached.
Don’t focus on winning, focus on working hard and working smart, developing skills and provide positive experiences. If you do that, the side effect is your players or team will win. Don’t under estimate your role in your players’ lives. Coaches are in a unique position to effect and influence young people, that is a privilege and it’s your duty to be a positive mentor, friend and role model. Remember, as a coach you will work with hundreds maybe thousands of players, but they only have one coach! Enjoy coaching, your job changes lives.
6) Can you recommend any particular resources for youth sport coaches?
Coaches spend hours, weeks, months and years developing their players, but very little time developing themselves. Tap into coaching courses, but make sure they are worthwhile. Take your head out of the trough and look around, be inspired by other coaches, other sports, hunt down the knowledge.
You can follow Peter and Sportif Judo on Facebook as well as checking out more details about their work via the Sportif Judo site.
For more great content like this – follow us on Facebook!
Are you a grassroots youth sport coach or PE teacher who wants to improve the athleticism of your athletes?? Check out our Fundamental series athletic development programs here.