It was a crisp Sunday morning in Perth, Western Australia. I was still pretty drowsy from an early start to get to my football match on time. I was playing centre back. I remember everyone taking about how the other team had a “man-child” playing. This guy was an early-starter… I was about to find out just how much of a man-child he was.

It was my first and last tackle of the match. We collided somewhere between my 18 yard box and the halfway line. I don’t remember how and what happened. Next thing I know I was on the sideline looking at my left shoulder…it didn’t usually hang that low on my torso…something was definitely wrong… it was broken clean in half. I wouldn’t play again for at least 3 months.
You see, I was at a disadvantage. Yes we were both the same age, at least chronologically, but we were definitely not the same size or physical maturity. What I experience was the hard truth of the “Relative Age Effect” or RAE…
What is the RAE?
The Relative Age Effect or “RAE” refers to the phenomenon of an uneven distribution of birth dates in sport, favouring players born earlier in the selection year over players born towards the end of the year. This occurs due to numeours factors spanning the bioliogical, psychological and environmental. RAE has been discovered in many sports: football, ice hockey, basketball, american football etc. Basically if physicality is required in the sport, there’s a high likelihood you’ll find RAE at a senior level. 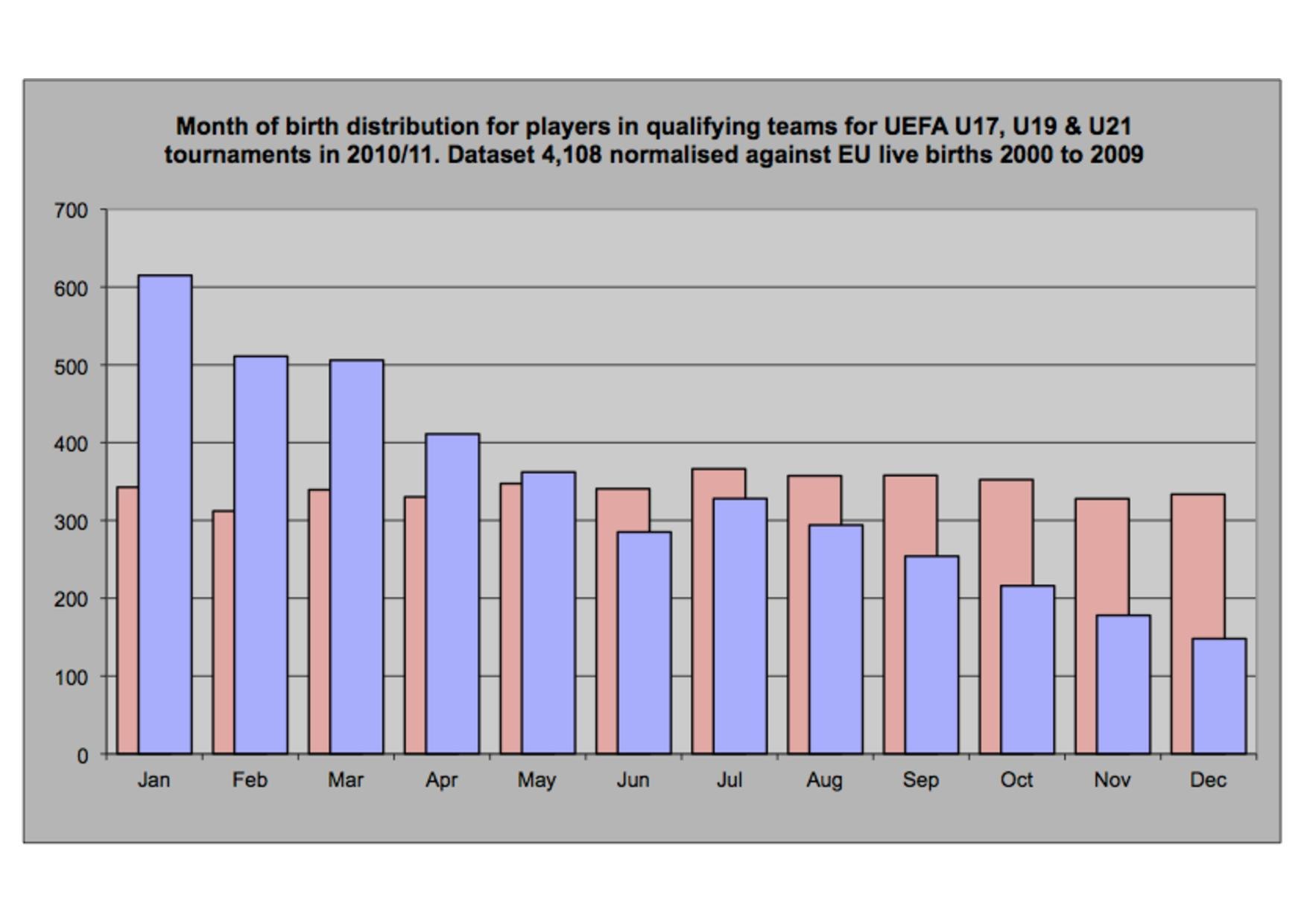 The best way to describe it is to use an example. Imagine an Under 15’s Football team. Jonny was born early in the selection year. Tom wasn’t. Jonny is what we might call an “early developer”. Tom on the other hand is a bit of a “late bloomer”. As a result of this Jonny is taller and has filled out a bit more than Tom. When they compete for the ball, Jonny may use his weight as an advantage, when they compete for a header his height may be an advantage, when they sprint Jonny needs to take fewer steps to cover the same distance. In essence, Jonny has a physical advantage.


Due to his standout physical qualities, Jonny is selected over Tom as a centre back. Jonny gets scouted for the county team, where he is lucky to receive a better standard of coaching, helping him to develop his game. Johnny now has an environmental advantage.
Jonny’s standout physical qualities also have a negative effect for Tom. Jonny has been selected over Tom for their club and county team. Tom starts to think “I’m just not as good as Jonny, I’m never going to get playing time ahead of him.” As a result Tom decides football is no longer the sport he wishes to play – and who can blame him? It’s not exactly a level playing field is it?
Now this is an exaggerated example, however it does shed light on the issues which happen due to the RAE. Essentially what we are seeing is a difference in the rate of biological maturation which has a knock on effect in other areas.
What are the consequence?
To put it simply – dropout. Varying biological maturation results in dropout. It’s inherent in all of us to want a level playing field – kids are no different. What the research suggests is that as biological maturation begins to vary, dropout begins to occur – but the dropout occurs more heavily in those born in the back end of the selection year. This has been shown time and again in many sports, in many countries in both hemispheres. However, it’s important to note that some sports exhibit a reverse RAE, that is – they favour late developers. For example, gymnastics.

The effect of RAE on injury hasn’t been fully investigated and currently remains equivocal. It makes logical sense due to physics that if two objects collide at similar momentum, the lesser object will come off worst. My anecdotal evidence suggest this.However, there also seems to be a interesting situation where early developers may be more predisposed to injury… perhaps due to excessive training volume during stages of development?
Decreased self esteem is also a harmful side effect for those born later in the selection year. Although it has been fairly unresearched in sport, some research in other arenas such as academia (yes it’s an issue there too – think about it!) suggest it may even play a role in the mental health of children/adolescents. Those born in the latter part of the academic year shower a higher incidence of suicide than their counterparts. There’s a scary statistic!
Decreasing of the talent pool is ultimately the final consequence. For whatever reason – deselection, injury or decreased self esteem, players dropout and the potential talent pool is decreased. This means the overall quality must decrease as there are potential elite players lost before they reach elite status. There is also a secondary effect, many players who were physically advanced at a younger age suddenly find their advantage disappears and they are no longer “talented”.

Just how confident are we that those talented 15 year olds will make it to senior level?
How can I reduce the issue of RAE in my team/club?
First of all – be aware of it. Have an unbiased look over your team. Who are your “early starters” and who are your “late bloomers”? How does this affect your judgement of their abilities?
Do you want the win or do you want development? If you want the win – only use your maturer players and congratulate yourself on your coaching mastery. If you want to see development in your players, consider giving all players equal game time in order to give unbiased development.
Change the dynamic – consider using uneven teams in training drills. How do your maturer players look  when they are playing a man down? Can your younger players exhibit better ability when they have a numbers advantage? Could regularly using uneven drills help develop your players and restrict some of the disadvantage? If you have very early developers – should they be playing an age group above? Is their own chronological age group really challenging them?
Take the time to encourage your late bloomers. Boost their self esteem and recognise their contributions. They are valuable players and athletes and need to know they are valued and have a role to play. Ensuring they enjoy their training and competition is the best way to ensure they keep playing it and keep the talent pool wide.

If you have the facilities – consider tracking biological age. At it’s most advanced it requires a wrist X-ray. However you can also get a good estimation from monitoring standing and seated height. You can find out how here.

So that’s it for now. I’ll leave you with a story. I was working for a professional football club whose academy played at the highest level in England. We were playing away at Liverpool. We had a very biologically advanced player playing in the Under 16s. The Liverpool coach shouted “Are you sure he’s not 17?!”. Our coach answered “Nah He’s 14 mate.” The weirdest bit…he wasn’t lying.
To stay up to date with the latest content, please like our Facebook page here.
Are you a grassroots youth sport coach or PE teacher who wants to improve the athleticism of your athletes?? Check out our Fundamental series athletic development programs here.

Links:
10 years RAE
A Proposal to Reduce the Age discrimination
A New Factor in Youth Suicide
Investigation of growth, development and factors associated with injury in elite schoolboy footballers